We are at a crisis in transportation. In years past Virginia’s highways were lauded as some of the best in the land. In fact, our system has traditionally been recognized as one of the best in the country. But not anymore. Something in excess of 44 percent of our bridges and tunnels are structurally deficient. Those faulty bridges and tunnels can be found throughout the Commonwealth, not just in Northern Virginia and Hampton Roads. The same can be said for deteriorating roads, traffic congestion, and underfunded public transit options.

We need a sustainable source of new funding for transportation. Experts tell us we need in excess of one billion dollars a year. The General Assembly has delayed action for years, and if we continue to do so, we run the risk of losing federal transportation funds. Those dollars must be matched, which we will not be able to do by 2017. Clearly, we have to do something.

This year, right before the session, the Governor put forth a plan. I have not been terribly critical of the plan for a couple of reasons. First, I lost to the governor in 2005 and 2009. Any criticism I make of his plan is likely to be seen as sour grapes or at least taken with a grain of salt. Second, I think the Governor’s prioritization of transportation is a huge step forward. While his plan is imperfect in my view, at least it is a plan and a starting point for working toward compromise and developing ideas that would force a solution. Now, in the closing days of the session, we are closer than ever to achieving a lasting transportation solution. In fact, we are poised to pass a plan out of the Senate. We do not need to have this discussion again in a year or two, or even five or ten. The final compromise should sustain our system for at least a generation. 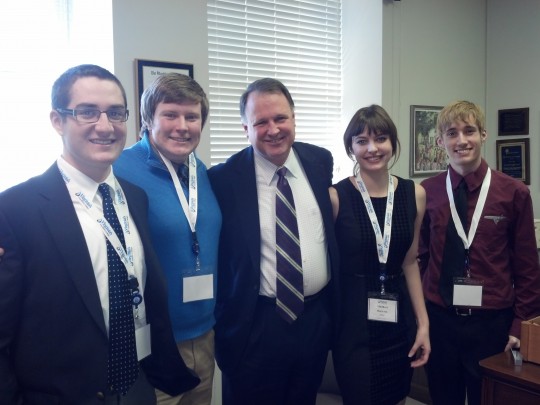 Two major components of the Governor’s plan are flawed in this respect. The Governor’s proposal eliminates the 17.5 cent gas tax and replaces it with a 0.8 percent increase in the sales tax. He also has recommended taking around $200 million a year out of the general fund to pay for transportation.

The highway system was created under Harry Byrd’s leadership and funded initially with a three cent gas tax. It was the first step in the 20th century toward modernizing Virginia’s economy and creating opportunity in every corner of our Commonwealth. The gas tax was last raised in 1986. The 17.5 cents a gallon tax generates about $700 million a year.

The sales tax was created under Mills Godwin’s first term as governor to fund the new community college system. Over the years, the revenue has been used primarily for other general fund purposes: to fund higher education, K-12 education, health care, and public safety. The transportation package adopted in 1986 also increased the sales tax by 0.5 percent to fund our roads.

In the last four years, the Commonwealth of Virginia has cut funding for public education by over $1 billion. At the same time we have reduced direct aid to localities for K-12, we have required more of local governments and school boards. For example, just last year we increased the local responsibility for paying for teachers’ retirements which resulted in school systems in every corner of the Commonwealth having to look at cutting costs. Alleghany County considered closing two elementary schools. Through the leadership of the Board of Supervisors, the County came up with the funding to keep those schools open for a year. This year, Alleghany County is looking at closing three elementary schools. Alleghany is not alone. Rockbridge County has shut down schools. Albemarle County is considering closing schools. The same can be said for dozens of counties around the state.

All localities are facing significant fiscal pressure due to reduced funding from the state coupled with increased responsibilities. In that atmosphere, it just makes no sense to me to take upwards of $200 million a year from the general fund, money that could be flowing back to local schools, and spend it on roads. The bottom line is that when Virginia is shortchanging its general fund obligations, we have no business opening the general fund spigot to an area of endless need. By the same token, it makes no sense to me to raise a tax that has historically been used for general fund purposes for transportation. If the sales tax is to be raised, some or all of that money needs to go to education to take pressure off of the real estate tax at the local level.

In addition, it makes no sense to abolish the gas tax, a significant portion of which is paid by nonresidents who use our roads, and replace it with a sales tax, which is largely paid by Virginians. A more commonsense approach would be to replace the existing gas tax with a sales tax on gasoline, which will at least provide for some growth in revenues from year to year to help keep up with growing expenses relating to road maintenance and construction. If we are going to raise the sales tax, we should divide the money between higher education, K-12 education, and transportation, as proposed by Senator Dick Saslaw of Fairfax.

If we are going to use any portion of the general fund for transportation, the funds should be used for transit and rail. These modes of transportation are intended to move large numbers of people both short and long distances. Many public transit users lack access to private automobiles and reside in congested areas, where a reduction in private automobile use will lead directly to a reduction in costs related to highway maintenance and construction. Advocates for transit and rail have been demanding a fixed source of revenue for years. I propose that we agree to use general fund dollars.

Finally, the Governor’s plan does not produce enough revenue to do more than fund maintenance of highways. Those who wish for new construction projects will be disappointed in the plan. If we adopt the transportation proposal as written, not only would we be making bad policy decisions, we would inevitably be revisiting the subject of transportation funding within the next five years. We should not act simply to act. We must develop a meaningful compromise that will provide sustainable revenues for decades to come.

The Senate will consider a plan this week. Likely, an imperfect bill will pass. Then the real work will begin. Negotiations with the House and the Governor will determine the final product. Stay tuned.

It continues to be a high honor to serve you in the Senate of Virginia. If I can answer any questions or be of service in these last two weeks, please contact me. I can be reached at district25@senate.virginia.gov or (804) 698-7525.